Mikhail Vasilyevich Lomonosov - Kurostrov's gem. He appeared here, surrounded by northern nature, on the banks of river Dvina. Driven by a hunger for knowledge, went to Moscow, then to Kiev, to Marburg, and finally to St. Petersburg. He arose out of nowhere in the abyss of ignorance in the light of the northern lights, pored over books, comprehended science
and became one of the most educated people of his time. Like him, our museum appears in the bowels of the Arkhangelsk land. A tectonic gap suddenly forms here, a volcanic caldera containing an expanding universe of scientific knowledge, the center and prime mover of which is Mikhail Lomonosov, the first Russian academic scientist.

The concept of the new building of the museum presupposes the preservation of the objects on the site that are valuable from an architectural and historical and artistic point of view: the school building and the barn are preserved, barn is being moved, repaired and moved closer to the pond – an object of historical heritage. New exhibition buildings (extensions in 2001 and 2009) are being dismantled. 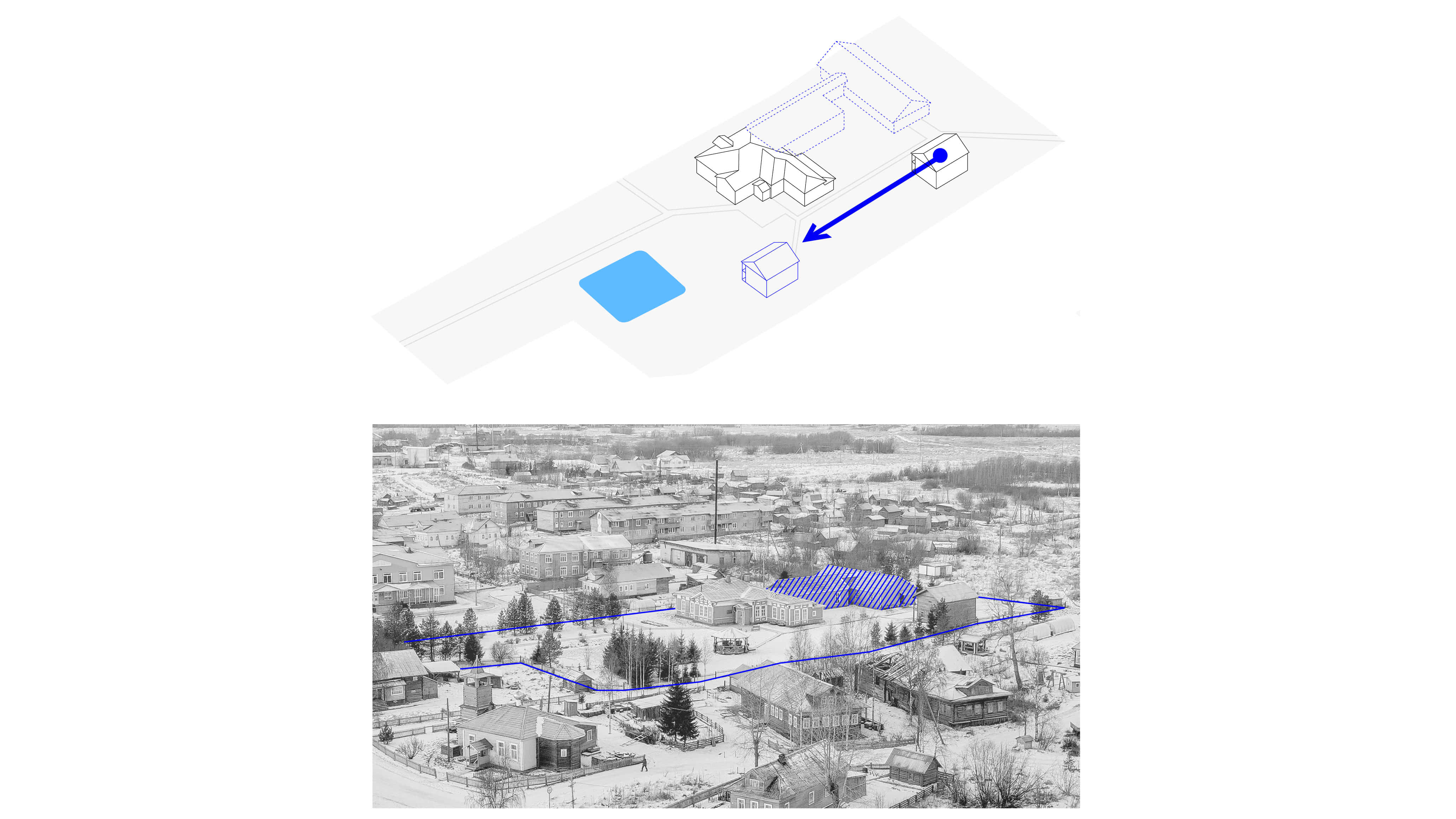 I.
Today the museum territory is swamped with water from the fields.

II.
The new exposition building of the museum, partially recessed into the ground, blocks the ingress of water onto the site. The soil serves as the natural thermal insulation of the building, minimizing heat loss.

III.
The school and the new building of the museum are connected by a covered walkway with a ramp.
The roof of the passage, as well as of the exposition building, is green.

IV.
The café, library, temporary exhibition hall and hotel are housed in a two-storey building. Art objects and landscaping objects are located on the hill. A new boardwalk road-path network is being organized on the site. 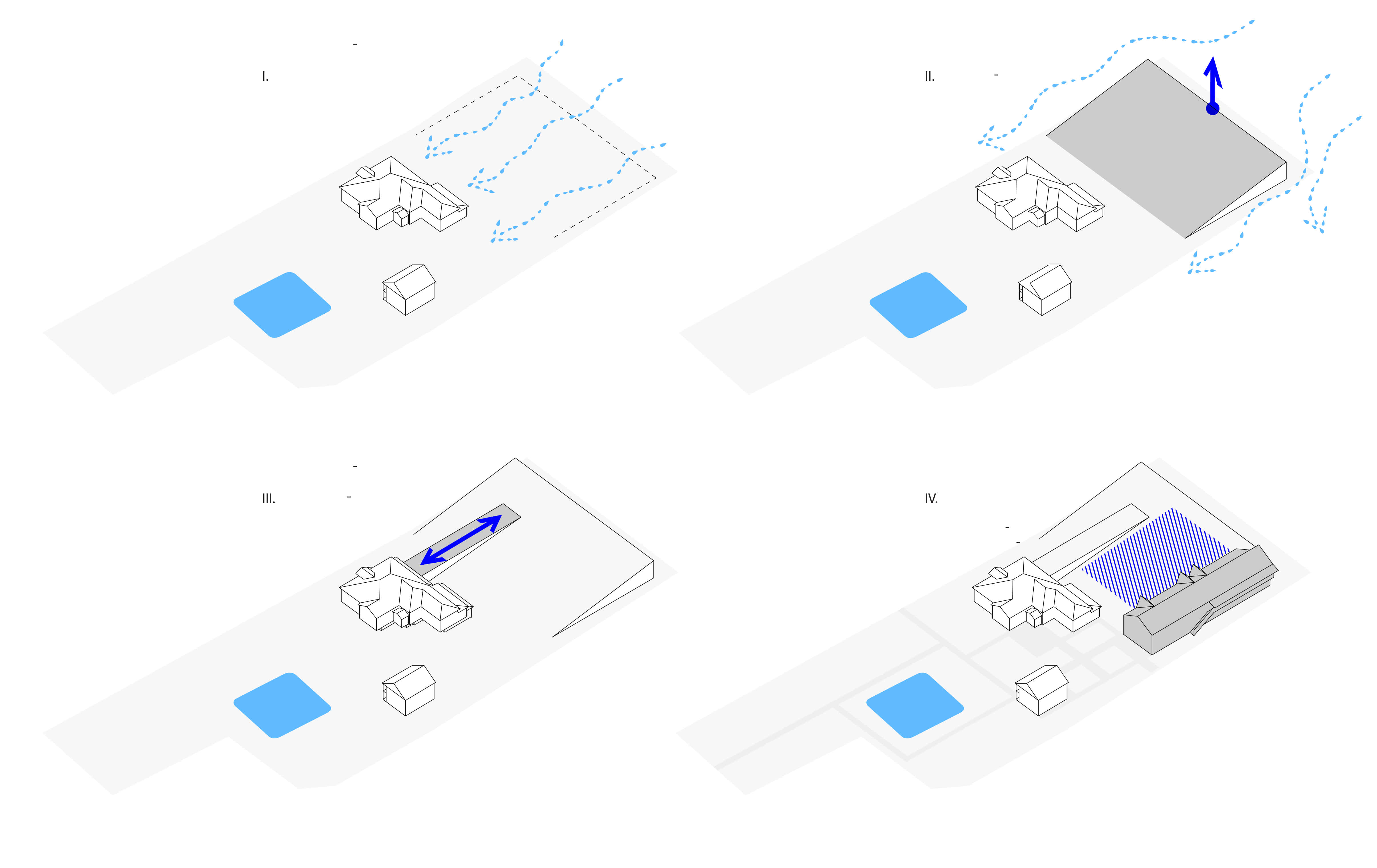 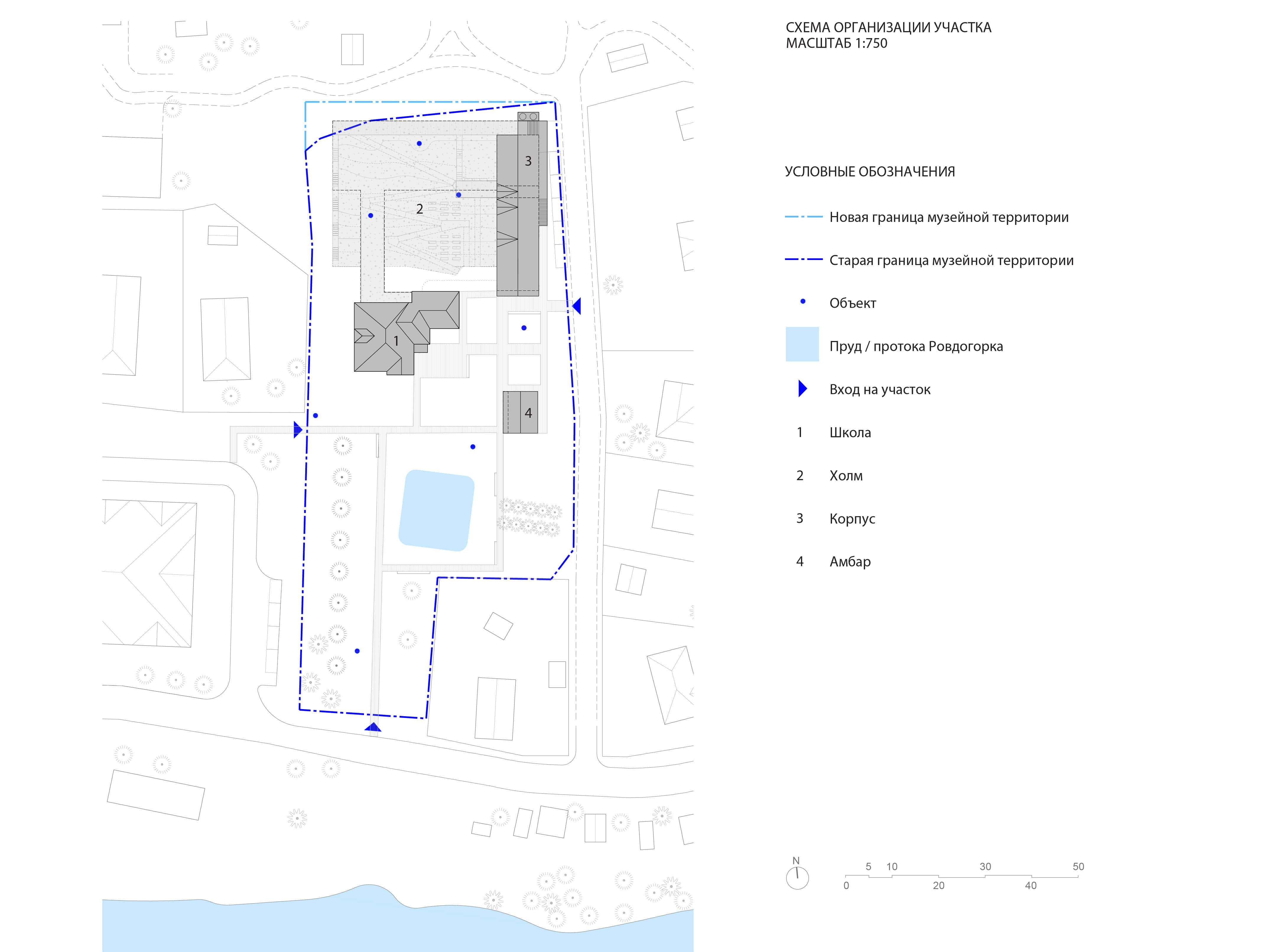 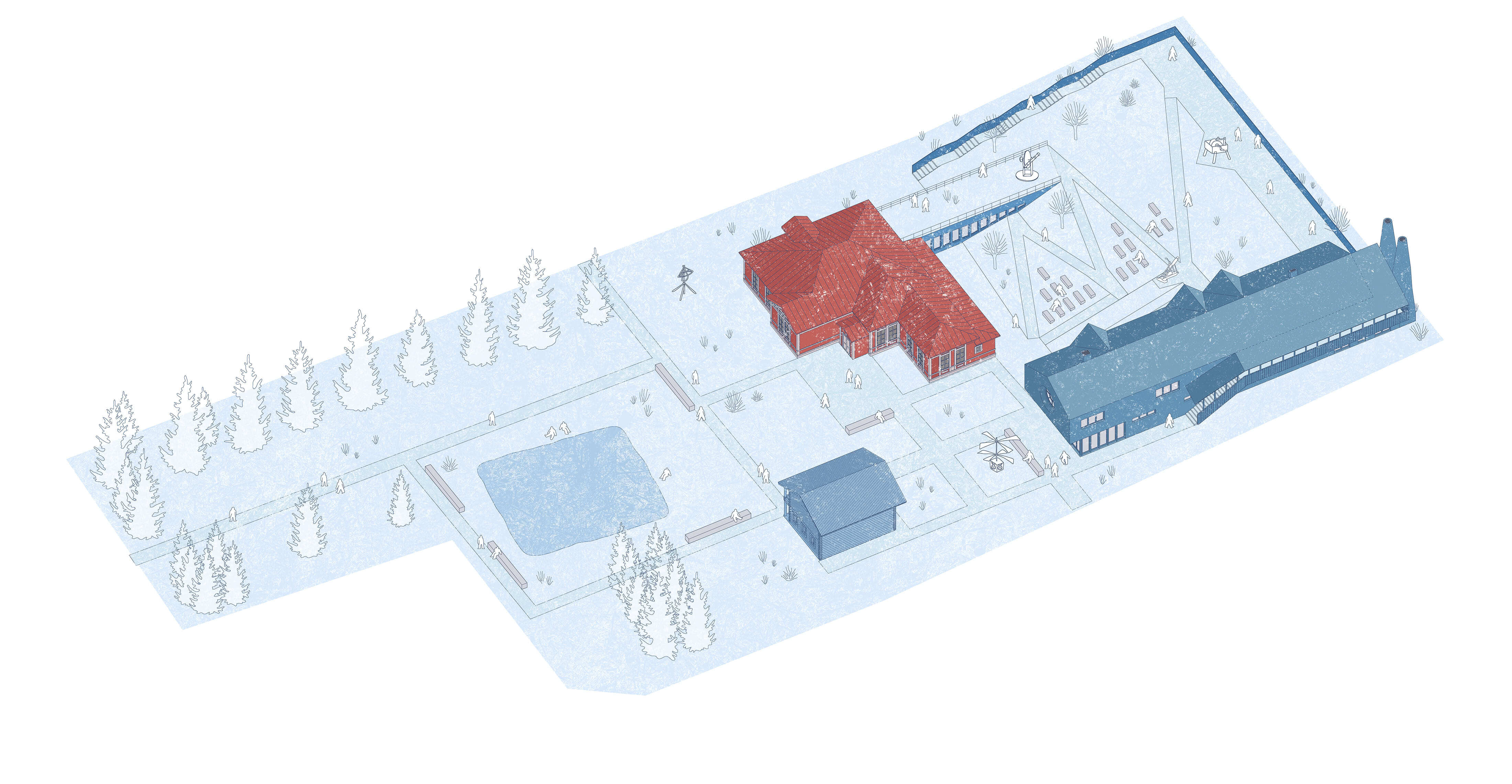 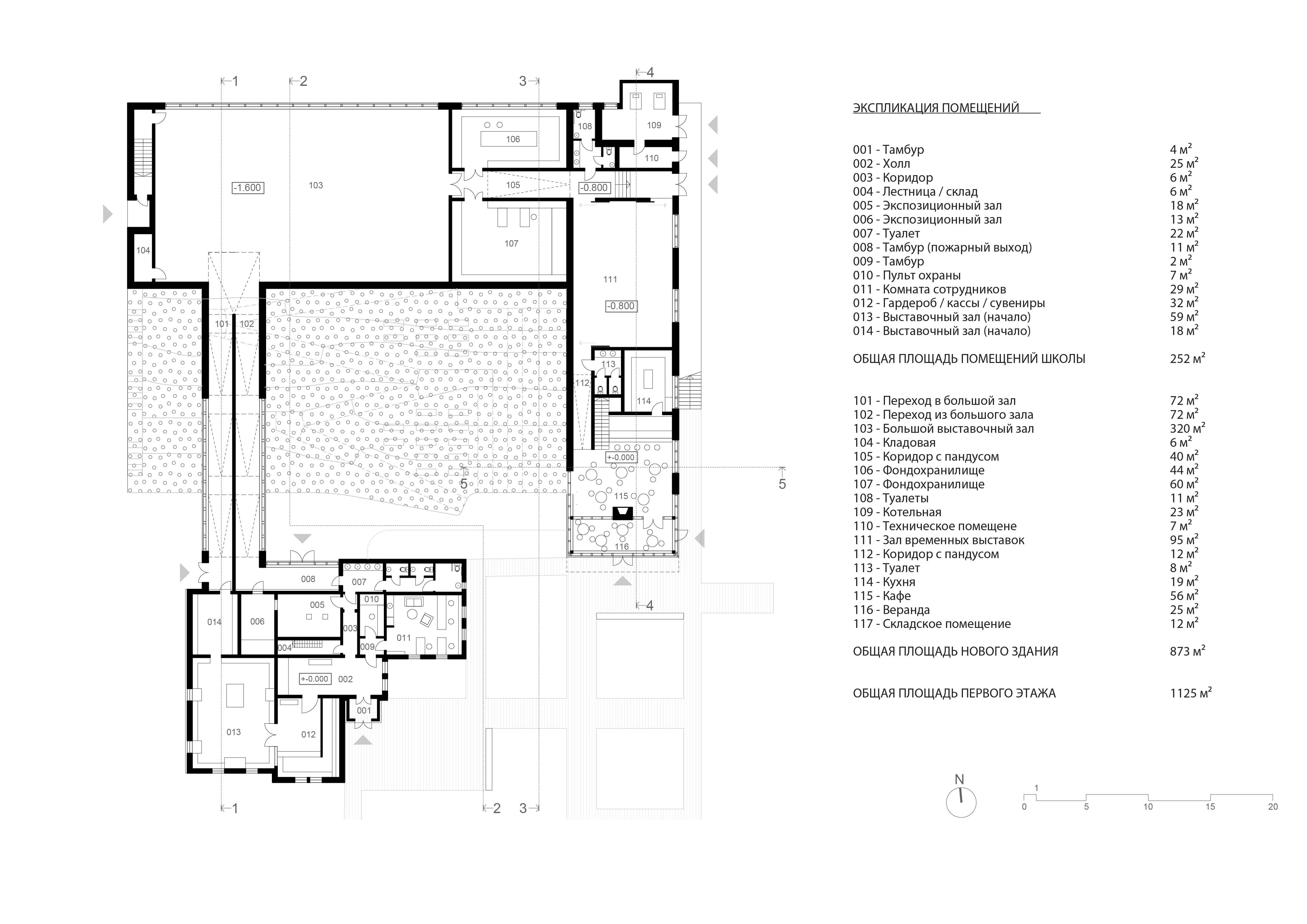 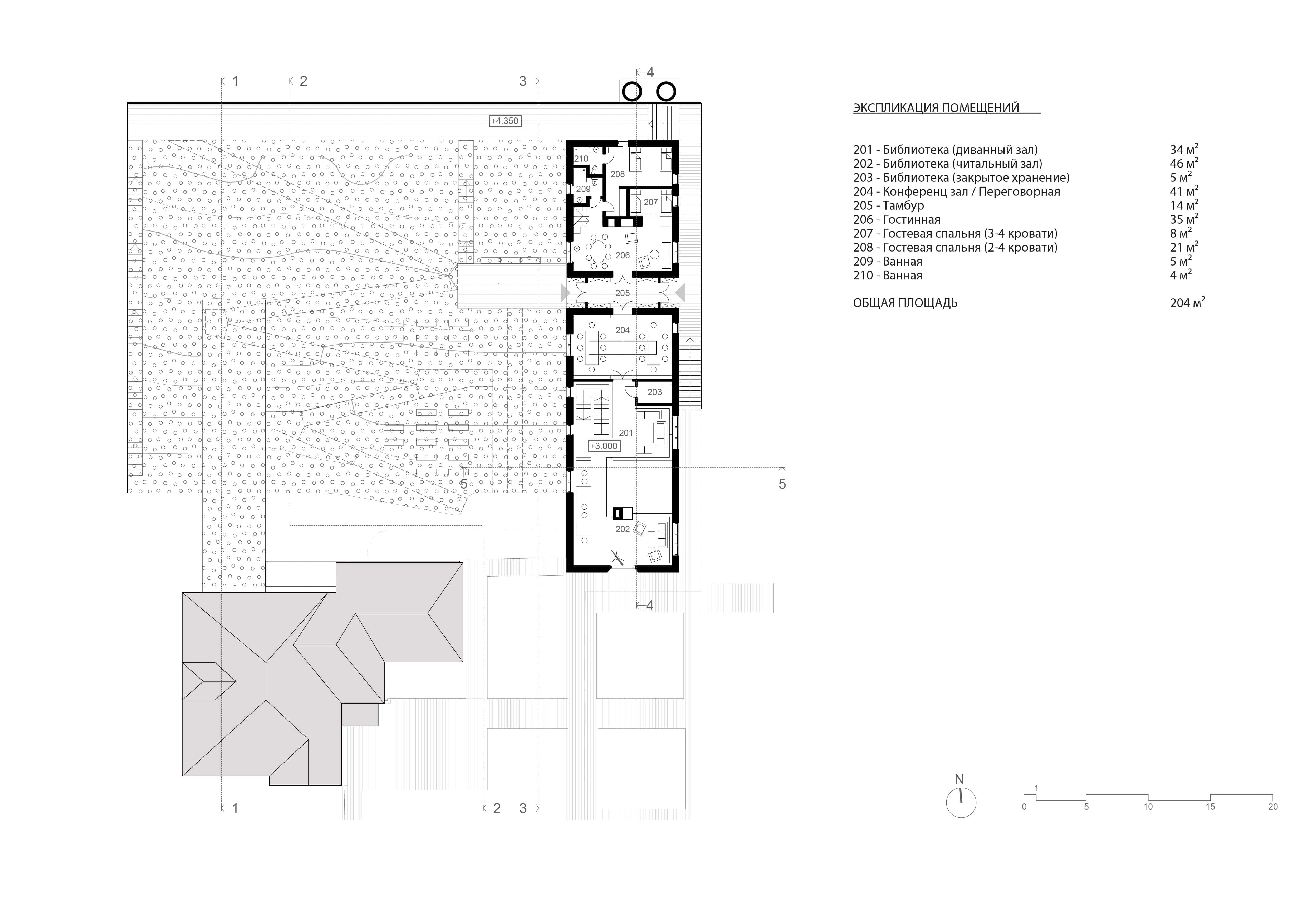 The right wing of the complex, ending with a guest block, contains the exhibition hall, library, storage and service rooms of the museum. The facade and roof are faced with a board in the tradition of northern Russian wooden architecture. This decorative technique, as well as the scale of the building, allow the new museum complex to fit into the architectural ensemble of the surrounding village. 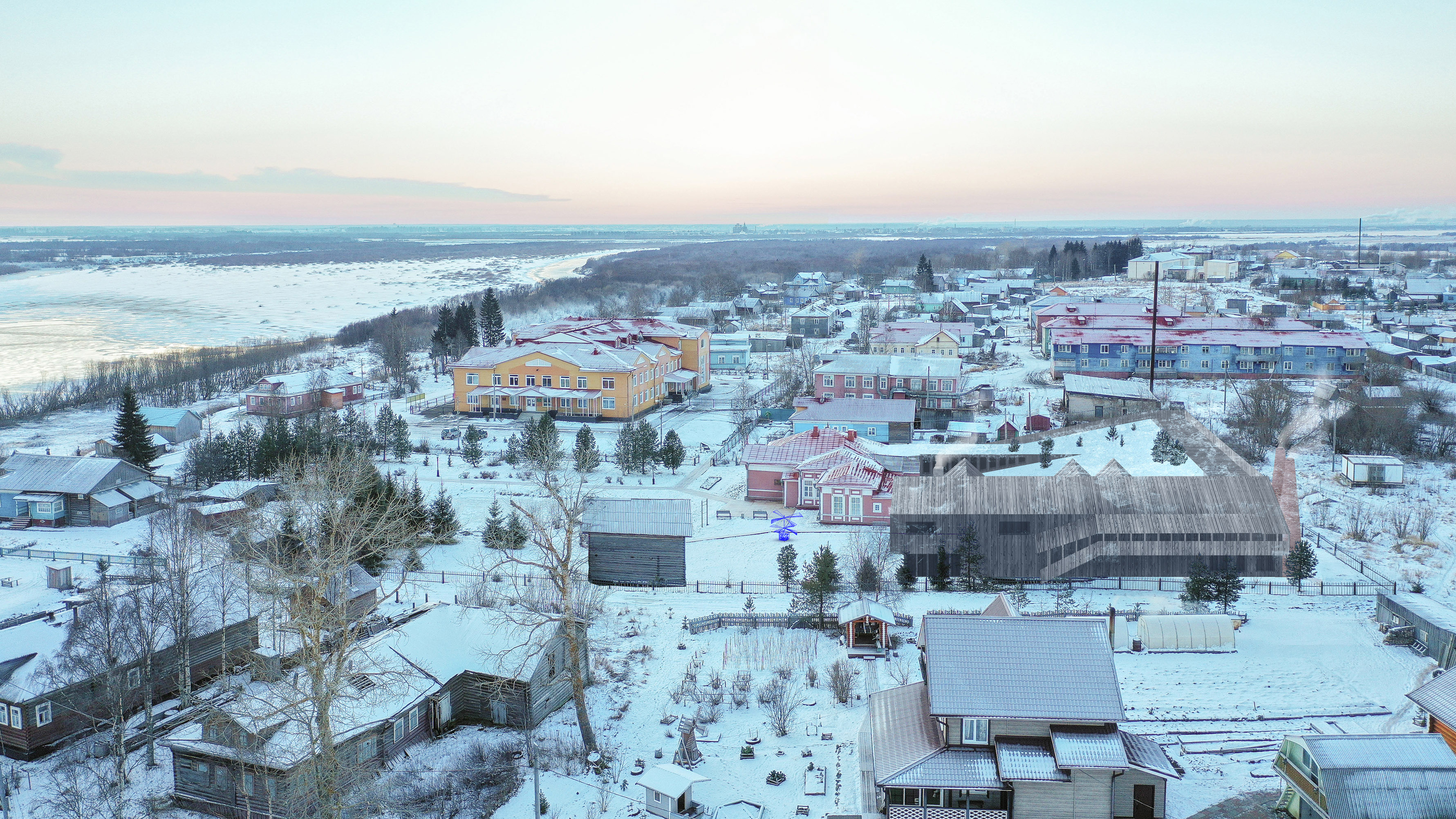 VIEW OF THE NORTHERN FACADE OF THE MUSEUM

From the northern part, which borders on the fields surrounding the Lomonosov Museum complex, the premises of the central exposition hall reveal a clear rectangular shape, dissected by line of windows that gives access to sunlight into the hall. The boiler room pipe, which marks the right corner of the museum, complements the façade ensemble. 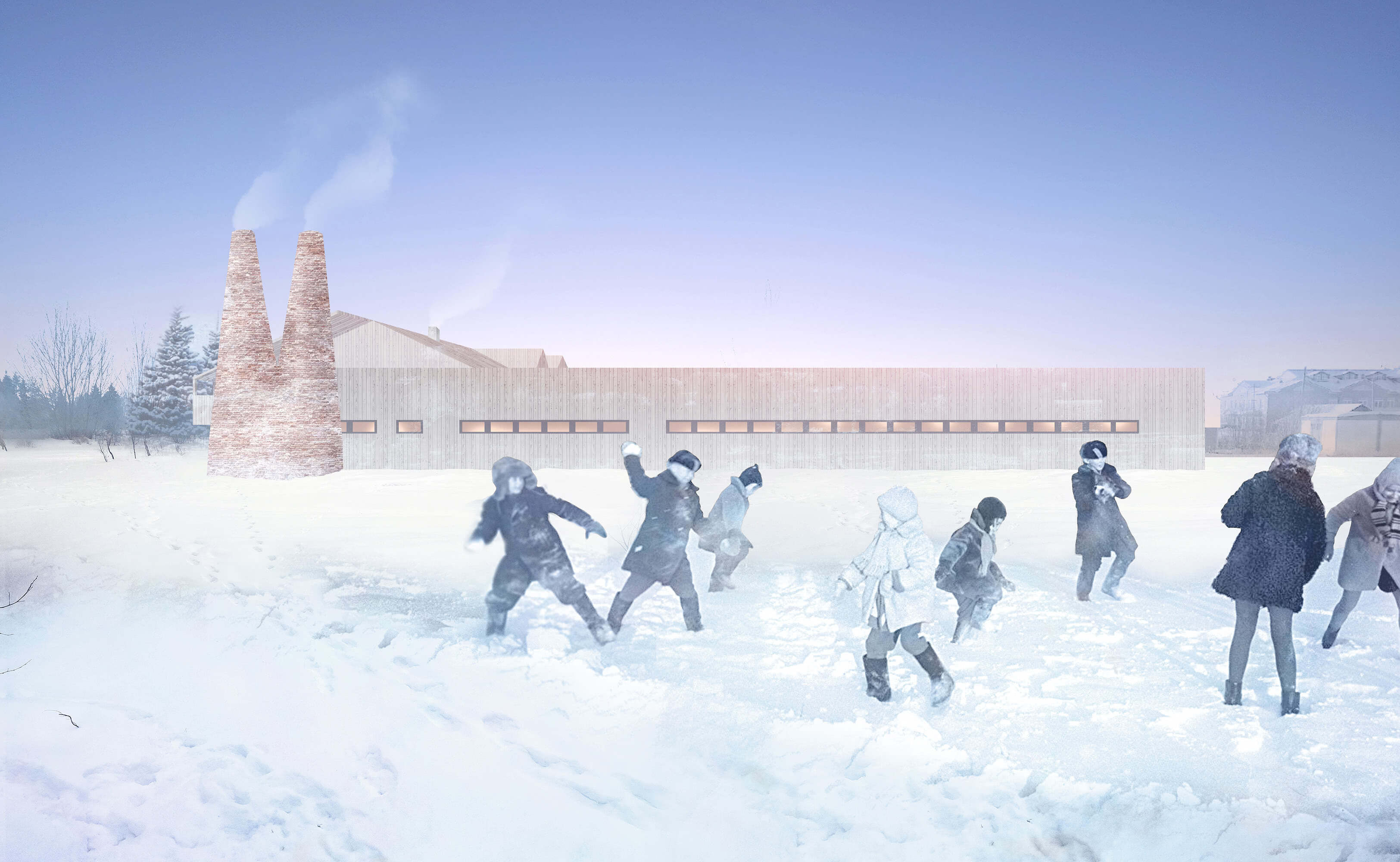 OBJECTS OF THE STREET EXPOSITION

The inhabited hillside, which also serves as a roof for the central exhibition hall, is terraced and adapted for various activities that can be organized here all year round. This is an amphitheater for concerts, nightly film screenings or open-air astronomy lectures, a picnic area, an observation deck and a children's playground. On the museum territory, interactive models of various devices and mechanisms developed by M.V. Lomonosov are placed. Here are just a few of the scientist's inventions.

1. Marine Astronomical Observatory. Training apparatus
Observatory for the production of many marine observations on land. It is made of ropes and can be moved with them like a ship.

2. Spyglass
Increases the angle of view, increasing the ability to distinguish between objects in different lighting conditions.

3. Tower for carrying out optical experiments

4. Large pendulum
A device made by Lomonosov to measure changes in gravity and tidal force. This centroscopic pendulum, responding to variations in gravity due to the influence of the Moon and the Sun, he installed in his home.

For the first time in the history of meteorology, this instrument uses an impeller to measure wind speed, so often used for the same purpose today.

Designed for the study of atmospheric phenomena, the model has risen two dozen meters. This was the world's first documented test of a heavier-than-air aircraft. 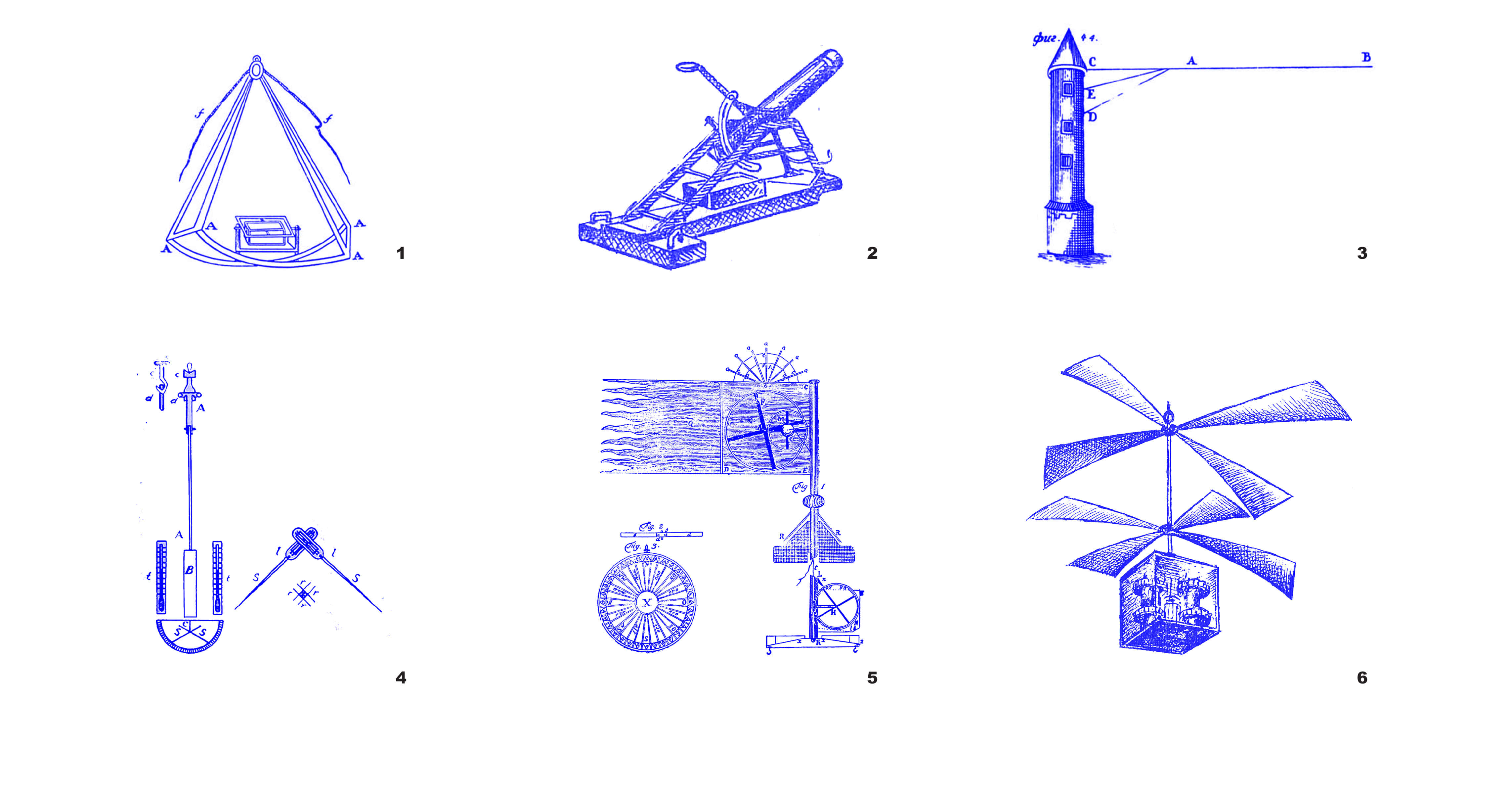 Mikhail Vasilievich Lomonosov is probably the first fundamental Russian scientist who excelled in many areas of scientific knowledge: from physics and optics to chemistry and meteorology. He assumed the existence of Antarctica before it was discovered and invented a new telescope scheme, now known as the Haeckel-Lomonosov scheme. His corpuscular theory anticipated the emergence of the theory of molecular interactions accepted in modern science. What can we say about the ode to the northern lights, the alphabet and grammar? At the same time, his knowledge – advanced for the 18th century – now roughly corresponds to the knowledge of the current diligent high school student, and fundamental science has gone a long way in three centuries, such that Lomonosov's theories have exclusively historical value within its framework. Involuntarily, the question arises – how to actualize what Lomonosov did, how to build a historical exposition so that it meets the modern level of scientific knowledge of theories that are interesting and interesting to think about? In our concept, Lomonosov is the prime mover of the expanding universe of scientific knowledge.

Image: the first monument to M.V. Lomonosov, erected by P.I. Chelishchev
on Kurostrov in 1791

Entering the main hall of the museum "Lomonosov's head", the viewer faces material artifacts associated with the scientific and practical activities of the scientist. These are scientific instruments – a telescope, a horizonoscope, a density meter, and his inventions – a spring helicopter, and artifacts – a stone from the foundation of the first chemical laboratory, and documents – a statute on the founding of Moscow University, and works of art – a copy of a mosaic made of smalt welded by Lomonosov. Each of these material items is equipped with an interactive activation mechanism. Upon contact with a visitor or a group of visitors, a script is activated, demonstrating the story of the history of this invention and its place in the historical scientific context.

The script contains a certain perspective of scientific knowledge, which makes it possible to understand the path that science has traveled from the 18th century to the present day. This part of the exhibition is located inside the semicircular chapels surrounding each of the artifacts. Between the chapels or through them, you can get into the outer space of the hall and see a completely different exposition here. This is a full-scale picture of modern scientific knowledge, containing the latest facts and theories. Thus, from three plans – artifacts associated with the scientific activities of Lomonosov, diagrams of the development of scientific knowledge from the 18th to the 21st centuries and an exposition about modern science – the constantly expanding scientific space of Mikhail Vasilyevich Lomonosov is formed. 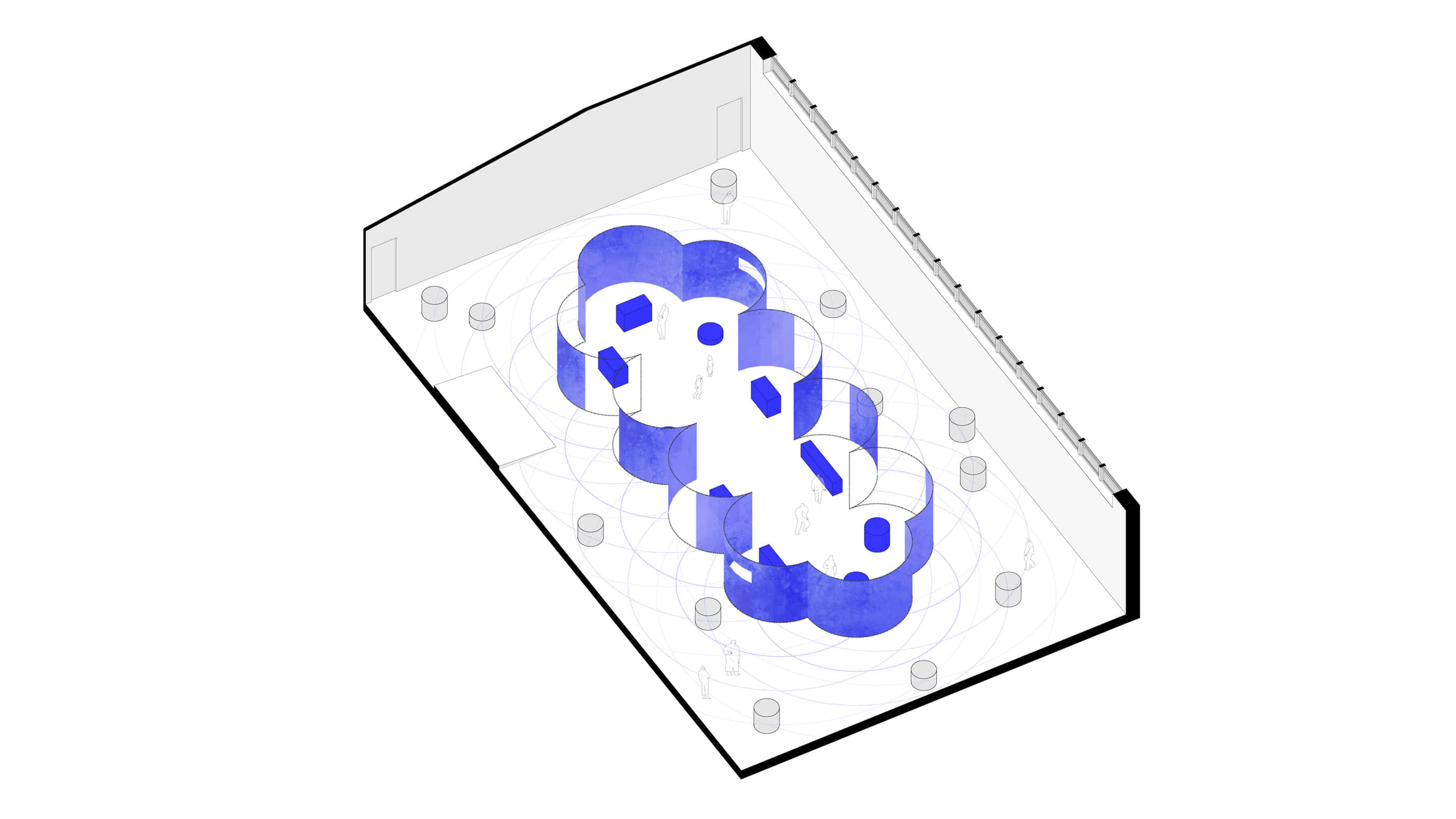 For the design of the chapels, it is proposed to use a synthetic material of variable transparency, which can be controlled using electrical pulses.
In an opaque state, the chapel walls will serve to project visual information describing the path that scientific thought traveled from the 18th to the 21st centuries. In transparent state – the whole perspective of the scientific Universe will be opened through them. 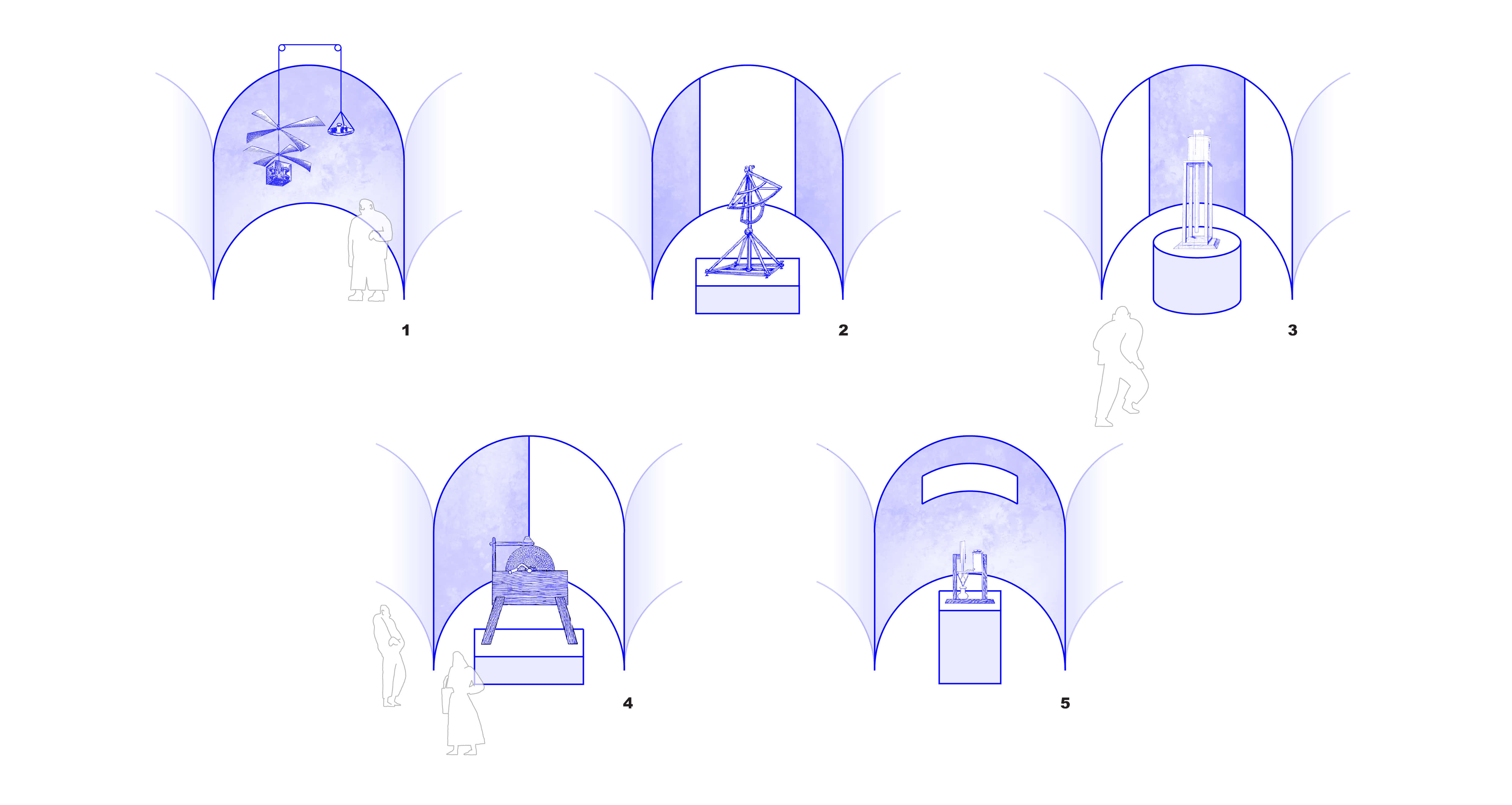 The organization of the space of the chapels is built on the gradient of dematerialization of objects presented to the viewer's attention. It is a physical metaphor for the workings of thought, denoting the movement of a person from "experience" to "understanding." 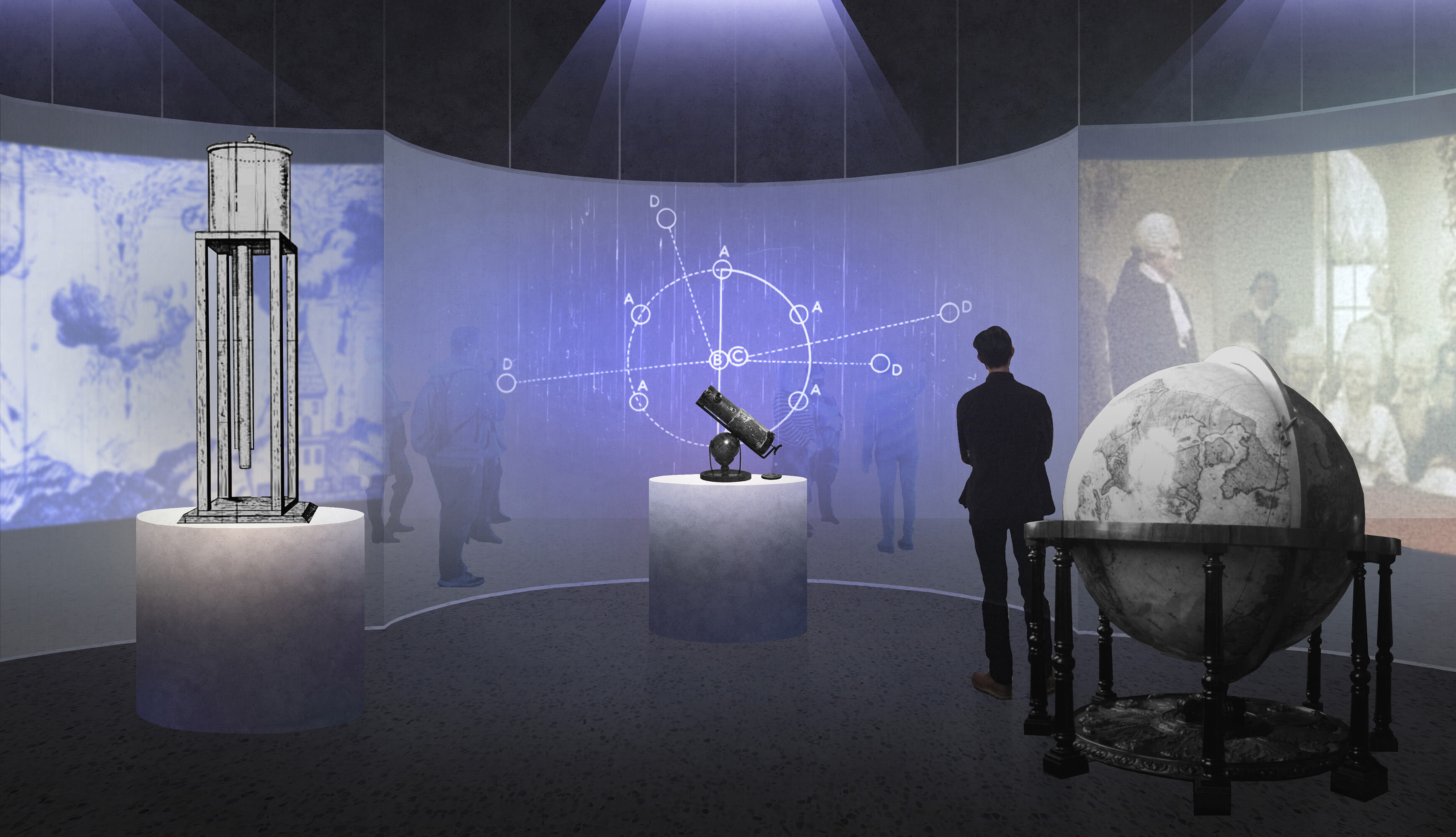 VIEW OF THE MUSEUM FROM THE POND SIDE

When looking at the complex from the side of the memorial pond, the viewer sees a barn moved to the pond, behind it – a school and a guest block with a cafe on the ground floor. The inhabited hill only slightly shows its back in the central courtyard of the complex.

The barn is a place for a bone-cutting workshop. On the second floor the workshop is combined with a pantry of materials and finished products (with the possible organization of a souvenir shop). On the ground floor, the workspace includes an exhibition hall and a table for collaboration, where, in the format of a of bone-cutting coworking at master classes, visitors will be able to adopt the skills of professionals. 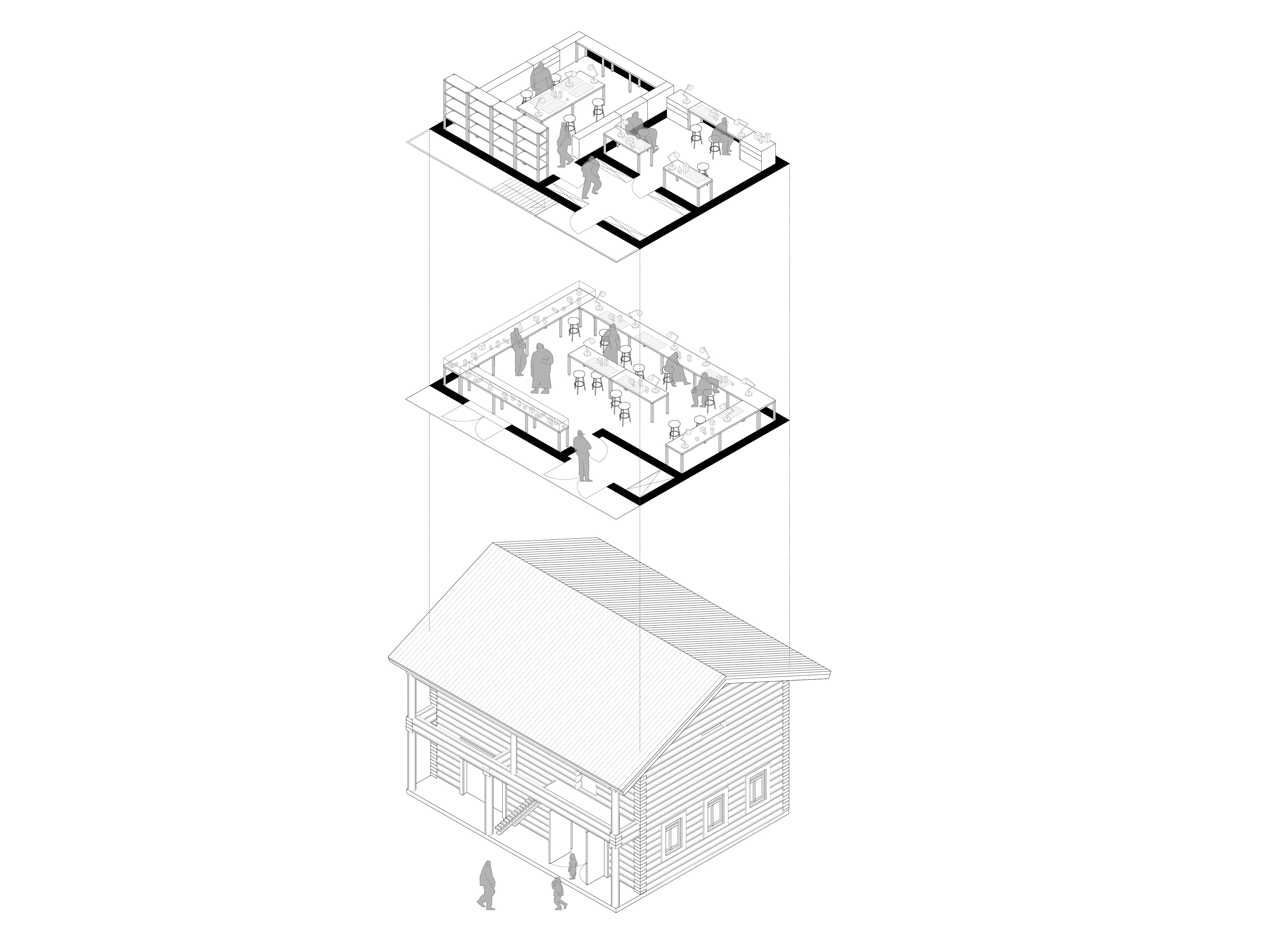